Yesterday we took a look at some players to watch from the AFC East, today it is on to the North. Enjoy!

Baltimore Ravens QB Lamar Jackson: Jackson started the final 7 games for the Ravens, leading the team to a 6-1 Record(only loss came to the Chiefs), and a Home playoff game against the Chargers. He ended up throwing for 1201 yards with 6 touchdowns and 3 interceptions, adding 695 yards on the ground. There’s no doubt that the Ravens will run the ball successfully in 2019, but Jackson will have to prove that he can throw the ball at an efficient rate if the Ravens want to remain Division Champions.

Cincinnati Bengals WR Tyler Boyd: The Bengals made headlines when they gave 4th year Slot Receiver Tyler Boyd a 4 year  43 Million dollar deal, after he caught 76 balls for 1028 yards and 7 Touchdowns, but really it was money well invested. AJ Green is not getting any younger, and 2017 First round pick John Ross has struggled to make much of an impact(but to be fair, 33% of his 21 receptions were TD’s last season). If Boyd can repeat what he did, the Bengals could have a offense that will be fun to watch. 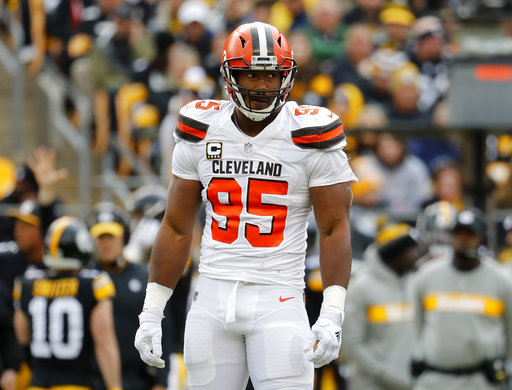 Cleveland Browns DE Myles Garrett: There are plenty of options on the offensive side of the ball, but the first overall pick in the 2017 Draft really found his groove in 2018, recording 13.5 Sacks and 3 forced fumbles. After reading that he has been training with UFC Star Stipe Miocic, with the goal of becoming faster, 2019 could be a huge year for Garrett. If he stays healthy, he should be a serious candidate to lead the NFL in Sacks, and could even get into DPOY conversations.

Pittsburgh Steelers WR JuJu Smith-Schuster: While some players are his age are just breaking into the league at his age,  22 year old JuJu already has two great NFL seasons under his belt. There’s a huge difference between what a #1 and a #2 Receiver see’s in the NFL, and with Antonio Brown’s trade to the Raiders, he will be finding this out early and often. If he can prove to be a legit #1 target for Big Ben, it will go a long way for the Steelers playoff hopes this upcoming season.

Tomorrow, I’ll be back with the AFC South!

Destinations for Nick Foles in 2019

Please consider supporting us by disabling your ad blocker